Eva Corbetta graduated in musicology in April 2007 at University of Milan, Italy.
In 2009, she graduated in singing at the Conservatory of Fermo G. B. Pergolesi of Fermo (Italy), then joined the “Accademia di alto perfezionamento” of the Giacomo Puccini theatre in Torre del Lago, Italy.

In 2010 in Torre del Lago, she debuts in the roles of Suora Infermiera, Suor Angelica and Lauretta in Gianni Schicchi.

She sang the role of Kate Pinkerton in Madama Butterfly during the 56th Puccini Festival. In the same production, she also sang at the Teatro Comunale of Ferrara and the theatre "G. Verdi" of Pisa.

In 2011/12 she was chosen for the '"Opera ensemble" of the Carlo Felice in Genoa, she debuted in Die Zauberflöte as Erste Dame.

In 2013 she debuted the role of Alice Ford in Falstaff by Verdi at the Opera House in Varna, Bulgaria, a role she then performed in many opera houses around the Netherlands.
In 2014 she performed the role of Donna Anna in Mozart's Don Giovanni in the Palazzo dei
Congressi in Lugano, Switzerland. In 2015 She was Violetta Valery in Verdi's Traviata, in Teatro Greco in Taormina, Italy.

In December 2017-January 2018 she went on a Tour in China, singing in venues such as Shanghai Grand Theatre and Harbin Philharmonic theatre.

In 2019 she was the main singer on board the MSC Orchestra and MSC Opera cruise ships.

In 2021 she won the second prize at “Concorso lirico internazionale Sordello” for the role of Donna Anna, that she performed also in the Classical Festival in Cuneo, Italy. 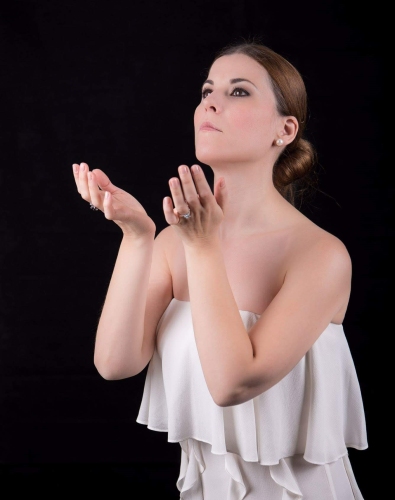 MAKE ENQUIRY Thanks!
GO BACK Thanks!